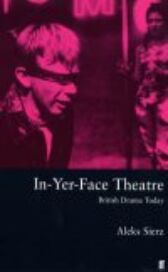 Examines the importance of the renaissance in British theatre that began in the 1990s with a rash of rude, provocative pieces by a group of twenty-something playwrights, whose debuts startled critics and audiences with their mix of sex, violence and street-poetry, notably Mark Ravenhill, Philip Ridley, Patrick Marber, Martin McDonagh. It also includes the last ever interview with Sarah Kane.

In-Yer-Face Theatre is the first book to look at this exciting outburst of creativity, controversy and theatrical innovation. It argues that plays such as Trainspotting, Blasted and Shopping and Fucking are much more than a collection of shock tactics - taken together, they represent a consistent critique of modern life, one which focuses on the problem of violence, the questioning of masculinity, the myth of post-feminism and the futility of consumerism.

Chapter 1: what is in-yer-face theatre? - A short history of provocation - The nasty nineties

Chapter 5: Mark Ravenhill - Shopping and Fucking - Faust Is Dead, Sleeping Around and Handbag - Some Explicit Polaroids

Chapter 6: boys together - Naomi Wallace's The War Boys - Jez Butterworth's Mojo - Simon Block's Not a Game for Boys - David Eldridge's Serving It Up