In Perpetuity Throughout the Universe 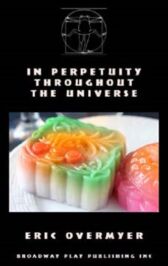 A tale of philosophical intrigue ...

It revolves around Christine Penderecki and her Chinese lover, Dennis Wu, both ghostwriters for a strange, secretive company that sees its lunatic story-telling clients as suckers

The company hires Christine to pose as Lefkowitz, another ghostwriter, who has mysteriously disappeared

As Lefkowitz, she is to help a powerful white supremacist wrestle his anti-Chinese ravings into publishable prose

As she writes, she is drawn into a world of espionage and dangerous half-truths

And she starts to understand the twisted logic her bigoted client lives by, which forces her to undergo a confrontation with her lover and her own prejudices

That leads eventually to another ghostwriter's mysterious disappearance ...

" ... a strange, sinister comedy ... Overmyer is a dazzling verbal acrobat as well as a serious student of pop culture ... probing the fears and prejudices of society. Overmyer makes it a wild unnerving ride" ~ Michael Kuchwara, AP