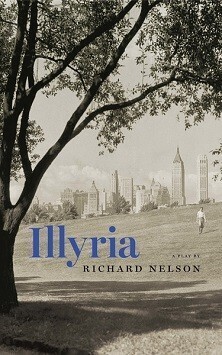 In the midst of a building boom in New York City, Joe Papp and his colleagues are facing pressure from the city’s elite as they continue their free Shakespeare in Central Park

From the creator of the most celebrated family plays of the last decade comes a drama about a different kind of family — one held together by the belief that the theatre, and the city, belong to all of us

'The story of a Great Man… Joe Papp’s influence on twentieth-century theater is as outsize as Robert Moses’s on urban development, though blessedly for the better… Illyria starts in media res, with the inner circle of the fragile yet ascendant New York Shakespeare Festival talking business and eating sandwiches… Nelson, as always, invests us in what precisely each person we’re beholding would be feeling in this particular moment in history' ~ Village Voice

'A grave and gossipy whisper of a play set in the Bohemian grooves of Manhattan in 1958, portrays a time when our thirty-seven-year-old birthday boy was down on his luck and feeling defeated. His name, by the way, is Joe Papp. If you keep quiet and behave well, even when others at this improvised shindig do not, you’ll hear the murmur of cultural history in the making' ~ New York Times