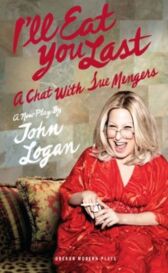 'You want to be a thing? Make yourself that thing'

Sue Mengers - the first female 'superagent' at a time when women talent agents of any kind are almost unheard of - invites you into her Beverly Hills home for an evening of secrets and all the inside showbiz stories that only Sue could tell ...

Back in the 1970s, Sue Mengers represented almost every major star in Hollywood

But by 1981 the glory days were fading

Première starred Bette Midler, making her return to the stage in her first Broadway play in over 30 years

'It's a heady sensation, thanks to the buoyant, witty writing of Mr. Logan Tangy and funny a delectable soufflé of a solo show' ~ New York Times

'Funny and profane - and something of a cautionary tale' ~ LA Times