Ibsen Plays 3 - Rosmersholm & The Lady From the Sea & Little Eyolf 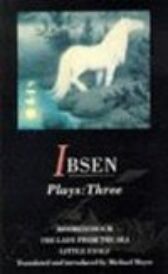 Includes three of Henrik Ibsen's most important works from his middle period. Generally regarded as the father of modern theatre, Ibsen's 'influence on contemporaries and following generations, whether directly or indirectly...can hardly be overestimated' (John Russell Taylor). The three plays in this volume show how Ibsen gradually turned from the study of social problems to a closer concern with the sickness of individuals

In Rosmersholm (1886), 'this most enthralling of Ibsen's works' (George Bernard Shaw), he explores the hypnotic hold one person may gain over another, a theme he took up in his next play, The Lady from the Sea (1888), and which reappears in Little Eyolf (1894), which William Archer ranked 'beside, if not above, the very greatest of Ibsen's works'