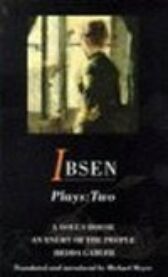 This volume contains Ibsen's two most famous and frequently read, studied and performed plays about women ...

A Doll's House (1879), his first international success, which 'exploded like a bomb into contemporary life'

And Hedda Gabler (1890), now one of his most popular plays, but greeted at first with bewilderment and outrage

Also included is An Enemy of the People (1883), whose central character was the actor Konstantin Stanislavski's favourite role