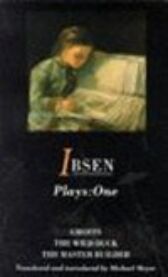 The plays in this volume range from the once shockingly realistic Ghosts (1881), 'the play that launched a thousand ships of critical fury'; through The Wild Duck (1884) with its innovatory symbolism and its touching portrait of a fourteen-year-old girl held in thrall by her feckless father ('Where,' asked George Bernard Shaw, 'shall I find an epithet magnificent enough for The Wild Duck?'); to The Master Builder (1892), showing the semi-autobiographical relationship between an ageing genius and a dynamic young woman