How the World Began - ACTING EDITION 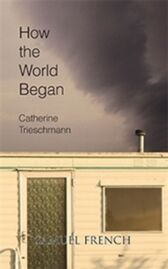 A provocative, intelligent, and deeply felt play that earned critical acclaim Off-Broadway at The Women's Project

But when she makes an off-handed remark regarding the origins of life, she unleashes community outrage and the particular distress of a disturbed young boy

In an intimate and artful inquiry of her characters' very souls, Trieschmann invites audiences to consider their own beliefs and their perhaps unspoken opinions of others ...

"Faith and science collide in one small room, and sparks fly spectacularly in this drama ..." ~ The London Times

"Characters interact naturally and believably, as emotions and tension heat up in the claustrophobic school trailer ... Trieschmann provides a thought-provoking look at the complexity of people who find it impossible to empathize with viewpoints not their own when it comes to the topic of religion" ~ Associated Press

"Trieschmann's gripping three-hander is very much in a tradition of American issue plays ... But the cleverness of this piece is that its central drama is not about science versus creationism, but about faith and faithlessness, the gap between east-coast liberalism and small-town America, and about the way we dismiss other people's points of view" ~ The Guardian

This is the Acting Edition for the Methuen Edition, click here