How the World Began 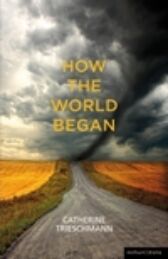 Sharp, thoughtful and mysterious, How the World Began is a powerful story about an outsider in a close-knit, devastated community ...

Susan, a science teacher from Manhattan, starts work in a small rural Kansas town that's been ripped apart by a tornado. When one of her pupils - the damaged, articulate Micah - takes offence at an off-the-cuff remark about how life on Earth began, Susan is thrown into an ethical firestorm about science and faith that leads to her fearing for her safety

Casting light on the tension between religion and secular liberalism, How the World Began explores the debate between creationism and evolution, and how this is taught in schools

With hints of American classics like Inherit the Wind and The Catcher in the Rye, the play traces the inexorable, fatalistic momentum from a single casual act into an all-encompassing dispute - a dispute which then threatens the very foundations of a community still reeling from a colossal disaster

In addition to its relevant and complex themes, the play is also about human psychology and what drives people to extreme ideological positions in times of duress

This shrewd and compassionate drama is astute, perceptive and controversial