How Shakespeare Won the West 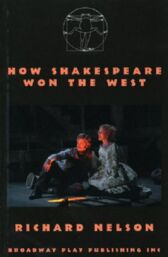 Funny as they are, they also make it clear just why these people are desperate enough to strike off into the wilderness, leaving everything but their vague dreams of stardom behind

The New York theater scene of the 1800s that Nelson paints so vividly is a free-for-all, and perhaps in less a wilderness than the one they re headed to

These early scenes introduce the plays central structural device, which is a key part of its charm

All the characters take turns serving as narrator, sometimes interrupting or correcting or embellishing each other's stories, and as one recalls an incident, others act it out

This makes for a vivid and truly playful atmosphere on-stage, one that celebrates the imaginative power of acting by well, by acting

What's most rewarding about How Shakespeare Won the West is the lively collaborative spirit that this structure creates - we get to know Nelson's characters through their stories, which they're at once telling and living

This sprawling, lively tale of wild spirits in the Wild West feels fresh, stimulating, and American in the best way." ~ Louise Kennedy, The Boston Globe

"A rollicking history lesson on American expansion, a celebration of this country's long love affair with Shakespeare, a chronicle of the can-do pioneering spirit and a valentine to the transformative powers of the theater" ~ Frank Rizzo, Variety