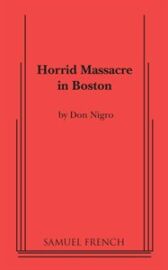 Jane Lamb, an orphan, finds a home at Mrs. Turley's Bunch of Grapes Inn in Boston during the Revolution

The colorful, eccentric and dangerous regulars she encounters there include a demonic roustabout who is a patriot, a traitor or a bit of both; Ophelia, a mad girl who talks to mice, and the Oyster Man, a street vendor obsessed with the Boston Massacre where he received a wound that has scrambled his brains to an alarming degree

Jane learns a vivid lesson about the dark underside of patriotic mythology in this nightmarish world of murder, secrets, betrayal and lunacy

This savagely funny, robust and haunting play is part of the author's Pendragon series