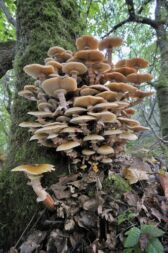 It's about the largest organism in the world, a giant underground fungus - Honey Fungus

Researchers Beppe, Qacha and their crew discover that Honey Fungus is highly intelligent and that it is the Noah's Ark of unique DNA sequences

When camping over the fungus, the researchers are exposed to Honey Fungus' electromagnetic aura and experience vivid dreams about its cosmic connectedness

The researchers got it all on video