Home of the Great Pecan 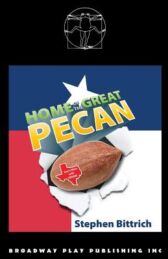 It concerns a stolen giant pecan, a minister on the make, aliens, a prom queen on the verge of a breakdown, beauty parlor gossip, and a shotgun wedding

Otherwise known as The Home of the Great Pecan

Tammie Lynn Schneider is desperate to get married again

For years, she's been working on her boyfriend, Greeley Green, and he has finally promised to get her the $2000 engagement ring of her choice

Problem is, Greeley has a bit of a wondering eye

Meanwhile, the beloved Great Pecan, a huge quarter ton statue, has been stolen

And the no-nonsense Sheriff won't entertain any of the rumors going around that the pecan was abducted by aliens ...

Zany and crazy, it's ideal for university, high school, and community theatre productions and may be played with either a large cast or a small cast doubling

"Stephen Bittrich's Home of the Great Pecan is the most delightful new comedy I've seen in a long while" ~ Martin Denton, NYTheatre.com

"Last year I saw 63 plays... this was the first play I saw this year since I'm off to a slow start... of the 64 plays... I put this in the top five for theater as well as entertainment. There are many plays out there that are of a serious nature but not many make you smile and laugh as this one did. A MUST SEE!" ~ Alan, audience member