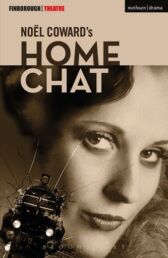 "I am shirking off the chains that have shackled me for so long I have suddenly come to realise that I am a woman a living, passionate, pulsating woman it never occurred to me before"

Janet Ebony and her best friend, Peter Chelsworth, are innocently sharing a sleeping compartment when their train to Paris is involved in a railway accident

Scandal and condemnation soon ensues as Janet's husband, Paul, and her fearsome mother-in-law accuse Janet and Peter of adultery

Outraged at these false accusations, Janet and Peter decide to take revenge by inventing an adulterous affair ...

Written with Coward's trademark wit and insight, Home Chat is a distinctly modern comedy about female sexuality and fidelity in a society rigidly governed by decorum and reputation

"An unexpectedly splendid surprise it's a genuine marvel that that play turns out to be a sparkling diamond" ~ Ian Foster, There Ought to Be Clowns