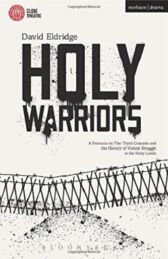 Large Mixed Cast
"There is one in the Kingdom of England. Who goes by the name of Richard the Lionheart. My waking dreams tell me he will come upon us. He will come to these lands and make pilgrimage, conquest"

Saladin's great army have corrected a great wrong by taking Jerusalem back for Islam, after the barbaric slaughter of their people one hundred years ago

But for Muslim and Christian alike Jerusalem is a holy city

Across England and Outremer, nobles answer the call to arms from Richard the Lionheart to march on Jerusalem in the third crusade

And retake the Holy City from Saladin

"Eldridge has always been the most muscular of writers and in this bold and ambitious play he swaps Basildon for the Holy Land in a piece whose epic swagger and salty humour are ideally suited to the Globe'" ~ Lyn Gardner, Guardian

"It is a remarkable feat of narrative compression" ~ The Telegraph

"A fundamental truth in matters of power, politics and sins on all sides committed in the name of religion and righteousness" ~ WhatsOnStage

" ... David Eldgridge is getting to grips with the complex reasons our world ... looks the way it does today... there's no denying Eldridge's ambition" ~ Observer

" ... fantastically ambitious ... I was gripped... make no mistake that Holy Warriors is a brave, prodigious and rewarding experience" ~ Independent