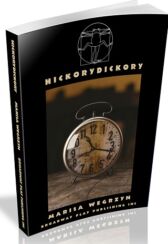 This quirky, off-beat comedy explores what would happen if we all had an internal clock telling us the time of our death

Someone has tinkered with Cari Lee's mortal clock

So now she's stuck at 17 for all eternity

And now she's the same age as her daughter, Dale

But some timepieces are not meant to be tampered with ...

"There's an arresting metaphor at the heart of Hickorydickory, one that Wegrzyn makes literal in her foray into magical realism: Each of us is outfitted with a 'mortal clock' that counts down the seconds until we're fated to die In most of us they're situated in our chests, the chain wrapped tightly around our beating hearts. For an unfortunate few, however, the mortal clock is lodged in the head; these poor souls know exactly how long they have left and can hear every second tick away Wegrzyn raises powerful themes here of mortality, responsibility and parental sacrifice. 'When you know' how long you have left, says the fiery Cari Lee, 'you don't tell the people you love' Hickorydickory's heartrending climax ought to stop your own clock for at least a few seconds" ~ Kris Vire, Time Out Chicago

"[Wegrzyn] is a quirky, gently anarchic and refreshingly populist writer unafraid of seemingly outlandish conceits, dark humor and broad theatricality Most conceptual plays like this tend to collapse in on themselves, eventually overrun by the logical implications of being able to know and shift time. But remarkably, Wegrzyn has created an internal logic that is difficult to defeat, however much a critic might try Better yet, Hickorydickory does not get trapped in some kind of trippy sci-fi gestalt but remains human, sweet, compassionate and honest" ~ Chris Jones, The Chicago Tribune