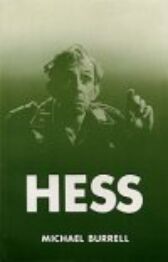 Rudolf Hess, close friend and deputy to Hitler as leader of the Nazi Party, flew to Scotland in 1941, at the height of the war, on a self-appointed mission of peace. He was immediately imprisoned and was later convicted at Nuremberg on charges of 'Conspiracy for war' and 'Crimes against peace'

He was given a life sentence

In this dramatic monologue Hess supposes what he might say, given the opportunity, about himself and the world as he sees it after nearly 40 years of imprisonment in Spandau gaol

"In Burrell's ingenious script Hess is many things, all provocative: a memoir of a madman, a study of political fanaticism, a treatise on justice, a portrait of old age, an analysis of penal confinement, a decent into hell" ~ New York Post