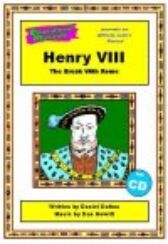 Unfortunately for him, he can't do this without first getting a divorce, something he can only do with the blessing of Rome

I Need a Son