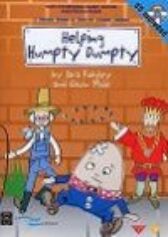 Published by Writers of Note!

Then along came Incy Wincy Spider and made Humpty laugh so much that disaster struck ...

Plenty of repetition and easy responses in the dialogue