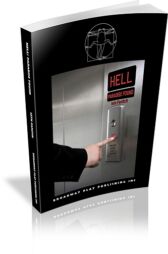 Struggling against the demons before him as well as the demons within him, Simon encounters other proud denizens of Hell ...

As well as a chic, fashionable Mother Theresa

At the end of his journey, Simon finds himself face to face with the most timeless conundrum of all -

And where do you truly wish to end up when you leave it?

" simultaneously nutty and witty with a philosophical message that never gets in the way of the laughs it's impossible not to like a show whose opening number includes Hitler and Einstein joining voices in the Arlen-Koehler standard 'Let's Fall in Love" ~ Anita Gates, The New York Times

"Think of George Bernard Shaw's Don Juan in Hell starring Sid Caesar With its heart in the kind of smart, irreverent sketch comedy Steve Allen used to do, and its head in a struggle for the soul of a good man, Hell - Paradise Found is a bona fide entertainment with ideas " ~ The Los Angeles Times