He Brought Her Heart Back in a Box and Other plays 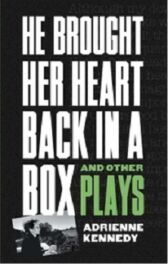 In He Brought Her Heart Back in a Box, her first new work in over a decade, Adrienne Kennedy traces the story of an interracial love affair in the 1940s, doomed by the devastating effects of segregation

The story unfolds through fragmented pieces - letters, recollections from family members, songs from the time - to present a multifaceted view of our cultural history that resists simple interpretation

This volume also includes the plays Etta and Ella on the Upper West Side and Mom, How Did You Meet the Beatles? co-written with Adam P. Kennedy

"One of the American theater's greatest and least compromising experimentalists ... Her dramas are sites of living history, where personal stories of racism's unhealed wounds mingle with dark tales thieved from the Brothers Grimm and 1940s Hollywood" ~ New York Times

"The effect is unnerving and dizzying, guaranteed - as Kennedy's plays are always guaranteed - to trouble the mind for weeks on end" ~ Village Voice