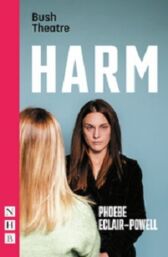 When an unhappy estate agent sells a house to Alice, a charismatic social media influencer, the two strike up an unlikely friendship

But as her obsession with Alice's seemingly perfect world intensifies, the lines between online and reality become dangerously blurred

A thrilling, twisted and razor-sharp comedy on the corrosive effects of social media and isolation, Phoebe Eclair-Powell's play Harm premiered at the Bush Theatre, London, in May 2021

'An edgy psychological drama ... shines a light on aspects of what is becoming an increasingly virtual society, especially for those in their 20s and 30s, obsessed with image and success beyond the point of reason' ~ British Theatre Guide