Harlequinade & All On Her Own 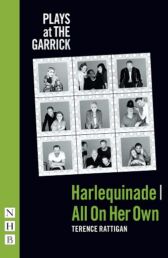 This double bill by Rattigan features two plays of striking contrast that display his astonishing range ...

This one-woman play tells the story of Rosemary who, alone at midnight in London, has a secret burden to share that is both heartbreaking and sinister

The plays were revived as part of the Kenneth Branagh Theatre Company's Plays at the Garrick Season in 2015, starring Zoë Wanamaker and Kenneth Branagh