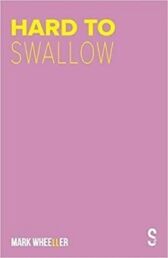 Hard to Swallow is based on Maureen Dunbar’s award-winning book and film Catherine: The Story of a Young Girl Who Died of Anorexia Nervosa

Catherine Dunbar died in 1984, after a seven-year battle against anorexia nervosa

She was just twenty-two.

This 2020 edition includes a foreword by the late Maureen Dunbar, previously unseen extra scenes and a reflection by Mark, on the astonishing journey of this widely studied play since its first performances, including one on the Olivier Stage of the Royal National Theatre

Variable Cast: 6 female, 3 male or 22 female/male or 3 female and 2 male with doubling

Mark Wheeler is one of the UK's most-performed playwrights. For more than 30 years, his work has been a staple part of the teenage Drama curriculum in schools and youth theatres across the world

His hard-hitting documentary plays Too Much Punch For Jud, and Chicken! have each been given more than nearly 6,000 perfrormances

Missing Dan Nolan and Hard to Swallow are both set texts for the GSCE Drama 9-1 exams. His work has been a staple part of the Drama curriculum both in the UK and abroad for the past three decades