Hansel and Gretel - the Musical 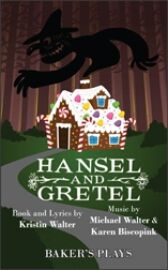 In this twist on the classic fairy tale, Hansel and Gretel are actually "Hank and Gertie," two poor children from the hills of Appalachia

When a witch moves in to town and puts their parents under a spell, these intrepid siblings must outsmart and defeat her

"Hansel and Gretel may not be the one the Brothers Grimm envisioned, but it works better as children's theatre" ~ Off-Off Broadway Review

"(The) bluegrass score, filled with energetic fiddling and earnest ballads, also leavens the proceedings. But it never seems out of place. What could be better than country music for a tale of backwoods hope and betrayal" ~ The New York Times