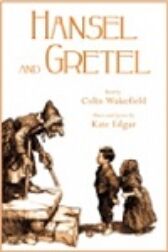 Including the sinister witch who lives in a house made of gingerbread and candy!

This beloved children's classic, devised for a company of actor/musicians but easily played by off-stage musicians instead, amazes and delights as Gretel must outwit the witch who has taken Hansel prisoner and prepares to eat him!

The show can be performed by a cast of up to 12, but the original production was staged with a cast of 6 actors (3M, 3F), who doubled as follows:

"A magical little fairy tale with a cast so sparkling with merriment that they should be bottled and given away as surprises to startled boys and girls on snowy Christmas mornings. The storybook picture set, the catchy songs and the dance and extempore flourishes will engross eager minds that love the magic of stories in living theatres" ~ stagecorner.com