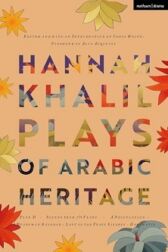 It encompasses a decade's worth of plays exploring her Arab heritage, drawing on family histories as well as significant events in the Arab World

They were all written during a period that included the end of the war in Iraq, the intensification of the occupation of Palestine and the birth and disillusion of the so called Arab Spring

An exploration of Gertrude Bell, the Museum in Baghdad and Britain's role in the birth of the Iraq

Plus two plays looking at the Palestinian experience, one based on a family living through the creation of the State of Israel in 1948, the other an epic collage that moves in time from 1948 to present day

Through the six plays the reader can trace a variety of approaches to storytelling, a host of memorable characters and some unforgettable stories