Hammered - A Thor and Loki Play 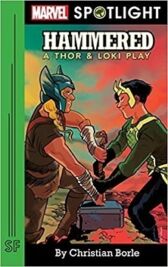 One is the Norse God of Thunder, Master of the Storm, Lord of the Living Lightning, and heir to the throne of eternal Asgard

The other born of a Frost Giant, but now the Norse God of Mischief

Yet they are brothers, and together they are …

The Mighty Thor and Loki!

As Thor struggles with the stress of final exams, his brother Loki finds himself under a different sort of pressure

But underneath all the thunder and mischief, these two Princes of Asgard discover a bond that will last millennia