Gypsy Woman and Other Plays 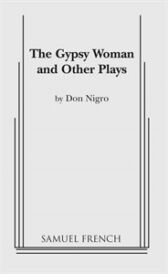 This Collection of Plays includes ...

Young sisters are in love with the same man in this lyrical work that mirrors the tragic story told in an old Scottish ballad. Jealousy, desire, murder and madness are the ingredients of this dark play that works well with the author's Specter and Lurker and also contains excellent audition material for young actresses

In 1938 playwright Odon Von Horvath was killed when lightening struck a tree he had taken shelter under. No one else under the tree was hurt. In Paris to escape the Nazis, he was on his way to see Snow White and the Seven Dwarfs. In this haunting play about fate, Von Horvath's flight takes him first to a room in Amsterdam where a beautiful gypsy reads his fortune and gives him a choice

Isabella and her servant Pedrolino return to Naples after ten years and decide to impersonate gypsies with bizarre results in this outrageous farce based on a scenario first performed by the Gelosi troupe four hundred years ago in Italy and France. Franceschina plucks her chicken and wails for her dead husband, Pedrolino reads her fortune by feeling the bumps on her body, someone has eaten Arlecchino's dog, Oratio is stark, raving mad and is pouring pastafazoola all over the cow, Captain Spavento longs to rub bath oil on the beauteous Flaminia, Flavio and Isabella exchange the most wretched Petrarchian sonnets in history, Gratiano believes the cow is in love with him, Pantalone is strongly advised not to relieve himself in the soup, and Arlecchino discovers the secret of life and a very unfortunate recipe for cookies

This chilling nightmare play is not what it seems. A young man and woman argue about the morality of experiments they are performing on less intelligent creatures. The woman feels sympathy for the laboratory animals and worries about their suffering, a position the man ridicules. The animals are humans and the two speakers are their alien conquerors

In 1916 writer Henry James, confined to his bed by a stroke, dictates to his prim young typist. Much of what he comes up with dances on the edge of gibberish, a bizarre and funny parody of his labyrinthine style. Suddenly, the great man begins pouring out an entirely inappropriate play: a rip roaring pirate yarn. Miss Bosquanet is shocked, and is even more horrified when Henry reveals his scandalous last request