Green Man and Other Plays 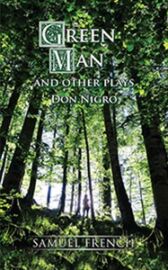 The 5 plays in the Collection are ...

Four young sisters are trapped for a century in a famous painting by John Singer Sargent, arguing over which if any of them actually slept with the Italian steward on the ocean liner that took them to Italy, and over the relative pleasures and dangers of physical experience, fantasy, self denial and art. Florence believes in experience, Jane in mystery, Mary Louisa in art, and baby Julia has had to go to the bathroom since 1882. This loving tribute to a very great painting is an imaginary journey into the world of the four girls imprisoned in it, and also deals with serious questions such as whether cockroaches are edible and why nobody would sleep with Henry James

In a frigid Christmas landscape in a Civil War year, a young Union soldier goes after a horse thief, is shot in a mysterious chapel in the Maryland woods, and wakes to an eerie delirium involving an innocent young girl, her seductive and dangerous mother, a cackling, half mad crone and a bloody hunter sharpening an ax. An American retelling of an ironic medieval masterpiece, this haunted Gothic play of desire, past betrayal and murder is an intriguing addition to the Pendragon series

On a rainy night a young professor drives on a twisted road through the woods near Princeton, swerves into a ditch to avoid a girl in a white dress, and finds himself stuck in his car with an outrageous and possibly demented young lady who might want to murder or make love to him, or both. This ancient ghost story is retold as a funny and frightening play about the relationship of desire to danger and the perils of relying on the kindness of strangers

The Woodman and the Goblins - M1,F3

A lonely woodcutter finds three eggs in the middle of the dark forest, brings them home, and they hatch into three beautiful young girls who first enchant, then torment and finally destroy him. This scarey, funny and haunting play is based on an old European folktale that was a favorite of Charles Dickens