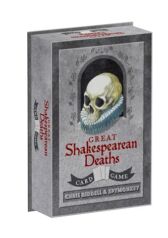 Which Shakespeare character had the greatest last words, and what were they?

Who enjoyed the slowest, most tedious death?

Who had it coming more than anyone else?

And who just lay down in a ditch and died of shame?

From Clarence, drowned in a butt of Malmsey wine, to Cleopatra and her asps, from Julius Caesar and the Ides of March to the black ill-favoured fly in Titus Andronicus, from the woefully tragic deaths of Romeo and Juliet to the lamentable (but frankly pretty amusing) demise of Pyramus & Thisbe

And then there's the pie that Titus bakes his guests

This hilariously morbid (and informative!) card game has players trying to outdo one another using everyone's favorite Shakespearean construct: the amazing deaths!

An ideal gift for anyone who loves Shakespeare