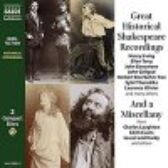 Early cylinder recordings of Sir Henry Irving preserve the voice and character of the greatest actor of the Victorian era as well as Ellen Terry, his stage partner for many years

The First CD offers a series of recordings which uniquely document the changing styles of Shakespearean performance with such varied actors as Tree, Gielgud, Thorndike, Laughton, Olivier, and from the USA, Booth and Barrymore

The Second CD offers an entertaining Miscellany of melodrama, tragedy, comedy - including the famous extract of Edith Evans' performance as Lady Bracknell - and an unforgetable dialogue between Laurel and Hardy

Additionally, are some great actors from France, Germany and Russia, including the formidable singer/actor Feodor Chaliapin