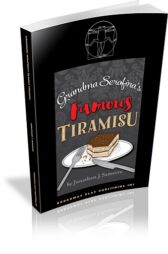 When Thomas D'Angelo pays a long overdue visit to his Italian grandparents, he soon finds himself caught in the middle of the ongoing, if farcical, war between the two ...

His grandmother, intent on plumping him up with home cooking, is sure she'll win him over to her side

His grandfather, meanwhile, surreptitiously schemes to make Thomas his ally

But never mind that - Thomas has come, in part, to seek advice over the strained relationship he has with their son, his father

But as he works to negotiate a peace between his grandparents, he finds within himself the possibility to resolve the struggles he faces with his father

As marvelous and memorable a confection as Grandma Serafina's famous tiramisu

Runs about an hour