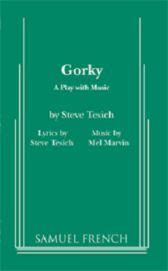 A fascinating, biographical portrait of the Soviet playwright and revolutionary set as a musical. Gorky's three "lives" are portrayed by separate actors

One is the innocent youth, the next, the impassioned revolutionary and last, the disillusioned old man, presumed victim of a Stalin purge. All three are on the stage together, talking and arguing with one another

But the play is more than just Gorky's story, it also explains a man, his character, his environment and times