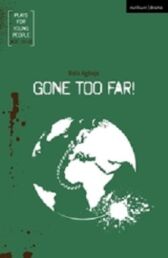 Nigeria, England, America, Jamaica - are you proud of where you're from?

Dark skinned, light skinned, afro, weaves - who are your true brothers and sisters?

When two brothers from different continents go down the street to buy a pint of milk, they lift the lid on a disunited nation where everyone wants to be an individual but no one wants to stand out from the crowd

A debut work produced at the Royal Court's Young Writers Festival, Gone Too Far! is a comic and astute play about identity, history and culture, portraying a world where respect is always demanded but rarely freely given

Gone Too Far! premiered at the Royal Court Theatre in 2007 where it was awarded the Laurence Olivier Award for Outstanding Achievement in an Affiliate Theatre, 2008

“In her remarkable debut as a playwright Bola Agbaje walks two teenage black brothers around a dilapidated London council estate. She exploits their close encounters to give us a jolting lesson about the range of identities, beliefs and anxieties concealed beneath black or blackish skins” ~ Evening Standard