Glamorgan and Other Plays 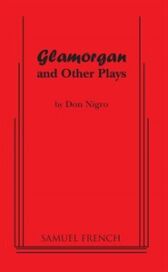 The 8 plays in the Collection are ...

Fair Rosamund and Her Murderer - M1,F1

Rosamund is mistress to Henry II of England and her beauty is so great that the jealous king has secluded her in a rose garden at the center of a labyrinth. Here she lives a lonely life until his jealous queen sends a murderer. The killer makes his way through the labyrinth and gazes into Rosamund's lovely eyes. A strange romance flowers. This play about romantic love features rich language, appealing characters and a dark medieval elegance

Give Us a Kiss and Show Us Your Knickers - M1,F2

This is a wicked little play about roommates and a new boyfriend. Amy usually falls in love with awful men and is ecstatic about finding the sensitive and caring Wes. She leaves Page to entertain him on the front porch. Page tells Wes strange tales about Amy's obsession with the people on The Benny Hill Show, her history of mental illness, and her compulsion to go after men with an ice pick. What is actually going on and who is really crazy?

One of the eccentric Pendragon plays, this darkly poetic drama tells of Jane Lamb's heritage of passion and madness through three generations. Owen Pendragon, the angry last Lord of Pendragon Castle, who has already buried three young wives, arouses first the pity and then the love of a beautiful servant girl. She dies giving birth to Mary, his child. Mary is mad and she burns the castle with Owen in it before fleeing to American with her schoolmaster, Zachary Lamb. The ghosts of Mary's parents haunt her; the madness returns and, in a series of breathtaking lurches through time and space, the play moves to a horrifying conclusion. The story is told as an intricately interwoven and highly theatrical nightmare that pulls you into a passionate, sardonic and darkly beautiful world

This supernatural play takes place in a famous haunted house: the former home of Major Weir and his demented sister who were executed in Scotland in 1670 for devil worship. Here the Major must relive his story each night while his mad sister spins at her wheel and plays with her doll. This play will cast a spell on all who see it

In a room in an eastern European country torn by civil war, a journalist and a strangely detached young girl with whom he has spent the night discover that they are strongly attracted. His probing questions elicit the fact that she spends her days as a sniper. Horrified and fascinated, he is drawn into her grim world as they struggle for understanding in the midst of a nightmare landscape

In this demented monologue a young woman gives birth to hundreds of squirrels. She relates the difficulties of trying to name and keep track of them, the traumatic effect they have on her cat, and her mixed feelings about their sudden departure for the woods. Wildly funny, this play about the mystery of creation is unlike anything you have ever seen

A woman believes her unborn twin sister is living in her skull. The sister speaks in tongues and urges her to increasingly bizarre and alarming acts. Vivid, strange and haunting, rich in language and atmosphere, this is a play you will never forget

Within the Ghostly Mansion's Labyrinth - F1

Lonely old Mrs. Winchester, having lost her family tragically, is advised by the spirits to build them a house. She spends years constructing a grotesque labyrinthine mansion. Now she wonders if the ghosts are friends or out to get her. Strange, funny, beautiful and sad, this spectral monologue will haunt you