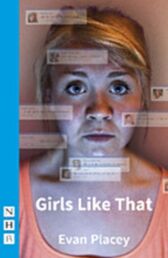 "Sket, skank, slapper, you deserve everything coming to you"

What would you do if a naked photograph of you went viral and you couldn't stop it?

Rumours run wild and everyone quickly forms an opinion - or two

Girls Like That has proven hugely popular with schools, youth theatres, and drama groups looking to tackle this vital subject in a dynamic and theatrically exciting way

"It's as technically adroit and inflamed a piece as I've seen all year, funny and shockingly frank ... first class theatre" ~ Michael Coveney

"An urgent, powerful examination of how frightening this phenomena [ie sexting] has made the teenage world" ~ National Drama Magazine

" ... a well-written, immaculately crafted and brave piece of energetic theatre" ~ A Younger Theatre

"The young people involved in the production engaged with the themes of the play in a way that affected their lives beyond rehearsals. One cast member told me the play helped her to shape her own opinions about pressures on young women and she believed performing the play would help other people think about the themes too. We had a great response from a range of audience members. Teachers ... students and parents talked to me about how the play had opened up some very important discussions" ~ Gemma Woffinden, Youth Theatre Director at West Yorkshire Playhouse

"Shades of a technologically sophisticated Lord of the Flies ... seriously impressive ~ Yorkshire Post