From Marriage to Divorce - Five One-Act Farces of Marital Discord 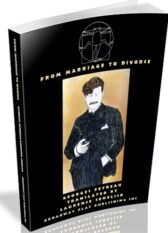 Loosely based on the failure of Feydeau's his own marriage, the plays were greatly admired in his time - described by one prominent critic as "insane merriment, inextinguishable laughter"

With DEAD WRONG Feydeau launched a new genre - the marital farce, the hell of couples

"And like the very great comic writers," another critic noted, "Feydeau knows how to make the public laugh at his personal bitterness"

The five one-act comedies are ...

A husband and wife stay together by force of habit, their relationship based on nothing solid. The wife's aggression and bitterness and the husband's selfishness and irresponsibility are revealed, and their ferocious animosity unleashes such powerful comedy that it obscures the underlying darkness

Inspired by Feydeau's wife's obsession with giving the children laxatives, especially his eldest son, Jacques, every character is despicable for their moral cowardice and egoism, providing a hopeless (but hilarious) environment for child-rearing

What to do about a wife going around the apartment in her nightie until lunchtime?

Trapped in a misalliance, a husband is set upon by his wife, his in-laws, and the midwife