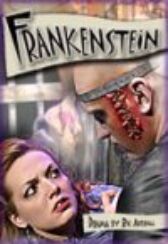 A mysterious laboratory, a dark cemetery and a university classroom provide the setting for Victor Frankenstein and his university friends, students who dabble in the mystical science of regeneration

Victor's fiancé, Elizabeth, and best friend, Henry, bring body parts from the cemetery for his experiments

But Victor's work backfires when he brings to life a superhuman, monstrous creation he cannot control

Huge and haunted by memories of a dark past, the Creature breaks out of the laboratory

The Creature is met with horror from everyone he meets except for Victor's blind professor, who feels sympathy for the Creature "of the earth" and helps him with both language and memory

The Professor also speaks of the importance of love and companionship, and the Creature realizes that this is something Victor has and he is denied

The Creature follows Henry's beautiful girlfriend, Justine, to the cemetery and asks her to be his love, his companion. When she resists him, he holds her so tightly she dies

Victor refuses until the Creature threatens to take Elizabeth from him on their wedding night. Victor begins to do the Creature's bidding

Elizabeth tries to stop the terror by facing the Creature and offering to be his bride if Victor might be spared ...