Frank Capra - The Catastrophe of Success 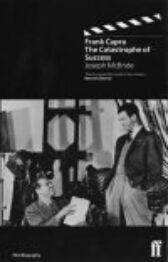 Based on extensive interviews with Frank Capra himself, this is a biography of the director of films such as "It Happened One Night", "Mr Deeds Goes to Town" and "It's a Wonderful Life". He achieved fame during Hollywood's golden era, working with some of its major stars, including Clark Gable, Gary Cooper and James Stewart. However, confronted with the great challenge that ripped Hollywood apart during the post-war era - the blacklist - Capra failed. The book examines the psychological pressures which caused the collapse of the Sicilian-born Capra's creativity at the end of the 1940s, under the onslaught of the McCarthy witch-hunt.