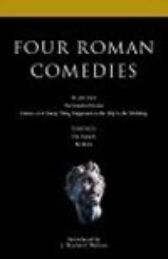 Collected here are four important plays that offer a unique insight into everyday life in ancient Rome, whilst maintaining a pivotal influence over the theatre of the present day

Terence's more sophisticated The Eunuch, and The Brothers are perhaps closer in sentiment to the attitudes of modern comedy and reflect situations with universal appeal

The volume is edited and introduced by J.Michael Walton, Professor of Drama at the University of Hull