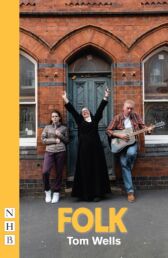 Surprising and poignant, this is a not-so-holy story of hope ...

And she loves a sing-song with Stephen

But soon everything's going to change ...

Finding solace in music, he knows he must start again

If only he knew how

Kayleigh is a teenager, unsure of herself

But when unexpected circumstances lead her to Winnie and Stephen, she starts to find her voice

★★★★★ "Tom Wells' comedy about an unlikely friendship cemented in folk music is a gem. It sparkles throughout with warm humour and sharp wit yet under that shiny surface lie some deeper questions about loyalty, trust and generosity" ~ WhatsOnStage

"A classic story of unlikely friendships...Like the writers of folk songs, Wells has an ear for the everyday rhythms of small joys and sadnesses.... measured.... compassionate... Folk's ambitions are as modest as those of its characters, yet it's sort of exquisite in its own tender, unassuming way... an empathetic ode to lives half-lived and the stories that are so often left untold" ~ Exeunt Magazine

"Tom Wells is a hugely engaging writer but what makes him so special is his gift of making the small change of everyday lives shine so brightly ... you leave the theatre feeling you have made new friends" ~ Daily Telegraph on Jumpers For Goalposts