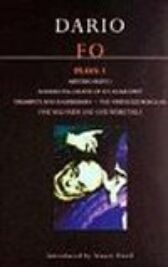 Dario Fo is Italy's leading contemporary playwright and performer, renowned throughout the world for his dazzling radical satires

Mistero Buffo, or The Comic Mysteries, is based on research into mediaeval mystery plays; The Accidental Death of an Anarchist concerns the "accidental" (or not) death of an anarchist railwork who "fell" (or was pushed) to his death from a police headquarters window in 1969

Trumpets and Raspberries is "A deeply subversive farce" (The Guardian) in which the boss of Italy's biggest car manufacturer FIAT, is mistaken for a left wing terrorist