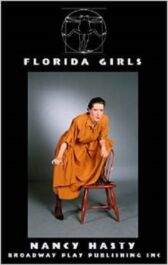 This offers the opportunity for a one-woman virtuoso tour-de-force, portraying all eight members of the Van Helms family, a blue-collar clan that includes five sisters and their loony, Bible-toting grandmother

The play, which is divided into 10 short scenes, is really an evening-length dramatic monologue full of barbed, comic nostalgia

"The strongest element of 'Florida Girls' is Ms. Hasty's writing. Her detailed descriptions of a small-town world where everybody is in everyone else's hair make the boredom and claustrophobia of belonging to a large family and living in a small town almost palpable. In the most vivid scenes, two of the younger Van Helms daughters are dropped off by their parents for the weekend at the home of their fundamentalist Christian grandmother, who assigns them absurd tasks like scrubbing used hairpins. The old woman also takes them to church, where they are treated to a fire-and-brimstone sermon denouncing the local beauty contest in which the two oldest Van Helms girls are both contestants" ~ The New York Journal

"A nostalgic monologue, both comic and barbed vivid scenes sharply drawn a comic affection for the world it describes" ~ The New York Times