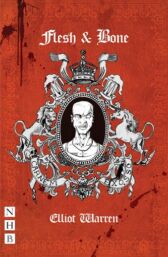 A vivid and fast-paced ride through a working-class London estate, fusing Shakespeare-inspired lyricism with Cockney accents

"Blistering ... explodes on to the stage as if Shakespeare was alive and well and living in a tower block in east London... the play's elevated language spliced with realism allows the characters to talk about who they are underneath: vital, interesting, multi-dimensional souls who want to live fruitful lives" ~ Scotsman

"Fearsome and fantastic a stunning debut from Warren, laying truths bare with a starkly inventive use of language and movement. It is a delight to experience new writing of this calibre, especially when it shows such distinctive grit. This is the kind of event that grabs manhood in both fists and refuses to let go. What's more, you won't want it to" ~ Exeunt Magazine

"A fiery, knockabout story of life on an East End housing estate Elliot Warren's Fringe First-winning debut play bursts out from the blocks it's vaudeville, Shakespeare, late-night improv, and anything it damn well fancies showcasing a writer of bruising talent and great heart' ~ Time Out

"Has a glorious, rolling swagger... this lyrical ode to the community of a London council estate is blunt, filthy and ingenious... [the] spittle-flecked gobbets of blank verse shove Shakespeare in between sinewy streams of modern patter. It works beautifully, turning the air blue with its sweary rhythm and pitch. The poetry of it hits like two fingers flicked with a smile" ~ Fest Mag