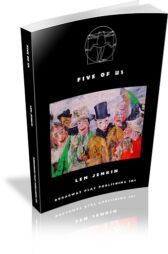 Winner of the Obie Award

Although they live next door to each other, their paths never cross

Until one fateful moment, which spells disaster for them all

One apartment is occupied by Mark, a young writer who churns out pornography while planning the "big novel" he will someday write

And his live-in girlfriend, Lee, an anthropology grad who works as a waitress

Their next-door neighbor is Herman, a mentally deficient messenger who speaks in a language all his own and amuses himself by calling 800 numbers to make hotel reservations he has no intention of keeping

When Lee is offered a chance to join an anthropological expedition to Sri Lanka, Mark is faced with a crisis - the loss of both her companionship and her income

With the connivance of his ex-con buddy, Eddie - a street-smart would-be mercenary - Mark decides to prop up his finances by robbing Herman's apartment, in the misguided belief that the poor eccentric has been hoarding money

But instead, what they find is the bizarre detritus of a stunted life

A life which is abruptly ended when Herman, coming upon them, is startled into a fatal epileptic fit

Fearful and guilt-ridden, Mark and Eddie try to cover their tracks

" ... Jenkin has a real genius for character" ~ The Hollywood Reporter

" a gripping, haunting experience that can't be dismissed lightly" ~ Drama-Logue

" full of surprises and subversions, so that the expected keeps failing to happen, and the unexpected keeps happening, in new and absurdly ironic ways Five of Us is several kinds of a good play" ~ The Village Voice