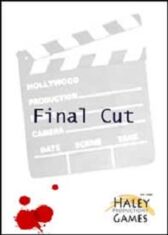 Director Eddie Cheek is looking for backers for his new movie, The Zombie Was An Alien, so he's throwing a gala shindig for interested parties

During which a murder occurs!

There are 6 PRIMARY SUSPECTS (these are the characters who will have full knowledge of the mystery - you'll give them each a complete script):

Eddie Cheek: A former script reader for Tantamount Films, now a director (and legend in his own mind). His hero is B movie director Ed Wood, Jr.

Cherri Pitt: She has the female lead of Kat Klondike in Eddie's picture. It doesn't matter how she got it, she just has it. For now.

Nova Devoe: She wants the lead and she always gets what she wants

Rock Stud: The male lead in Zombie. He hasn't had much work since his television series, Sky Fling, Pilot PI, so this job is a welcome one. He and Cherri are a hot item

Quinnie Winston: He's the make up artist and a supporting actor in all of Eddie's movies. They met literally by accident

Billie Clubb: A casting agent who's working with Eddie to cast this picture. Word has it her company is going bankrupt so this job is important to her

Henny Loggersnapper: The frazzled and frumpish but devoted script supervisor at Eddie's beck and call

Dr Willie: Rock's therapist - he's on Rock's payroll and therefore goes wherever Rock wants him to to be available for counseling. Dr. Willie should be at the ready to expound on the meaning of Rock's behavior and everyone else's for that matter