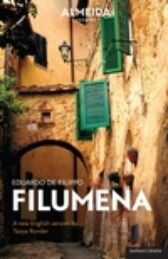 Filumena is Eduardo de Filippo's best-known work and arguably his finest comedy, drenched in Neapolitan atmosphere and full of entanglements at once romantic and cynical

Set in the balmy heat of late 1940s Naples, Filumena Marturano lies on her deathbed waiting to marry Domenico Soriano, the man who has kept her as his mistress for twenty-five years

But no sooner has the priest completed the ceremony, than Filumena makes a miraculous recovery!

As he reels in shock, Domenico discovers that this brilliant, iron-willed woman has a few more surprises for him ...

With masterful ambiguity, de Filippo depicts his characters with subtlety and balance - is Filumena a simple, illiterate woman who wants to create respectability for her children, or a ferine, opportunistic prostitute?

And will Domenico, the selfish aged gigolo, learn to repent and accept his responsibility to his past and his family?

Eduardo de Filippo was one of Italy's leading popular dramatists, a fearless social critic, a supreme man of the theatre, and a humane and compassionate writer

This new translation by Tanya Ronder is contemporary, fluent and accessible, and tackles de Filippo's comedy with deftness and verve