Everything is Not Enough 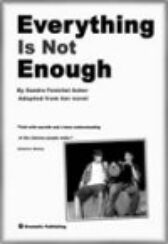 It's the summer before Michael's senior year and his life is all mapped out for him - winters in the suburbs, summers at the beach, the "right" major in college, and a career in his father's business

But Michael never charted this course, his father did

At l7, eager to discover the "real world" beyond his parents' protection, Michael lands a job as busboy at the Jolly Mackerel restaurant in Braden's Port, a resort town where he, his family, and his friends have long been "summer people" - well-to-do vacationers

At the restaurant, Michael meets Linda, a local "winter person" who is determined to make her way to New York and a career in fashion design

Michael admires her commitment and independence, and for the first time in his life begins to make some of his own decisions about his future

But he is also drawn into the lives of Linda's friend, Traci, and Traci's boyfriend, Pete, a former football star struggling with alcoholism and a raging frustration with his post-high-school life that he often takes out on Traci

When Michael finds himself playing an unearned role in their abusive relationship, he realizes this is the very world his father wants to protect him from, one of stunted dreams and sudden violence