Ever, Dirk - The Bogarde Letters 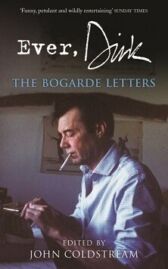 The hitherto unpublished Dirk Bogarde – the best of his marvellous letters

The success of John Coldstream’s bestselling biography of Dirk Bogarde demonstrates that the interest in one of Britain’s leading actors, memoirists and novelists does not diminish, even though it is more than a decade since his death

Bogarde was a secretive man, who destroyed many of his own papers and diaries

Fortunately, the recipients of his letters treasured them, enabling John Coldstream to bring together this fascinating collection of hitherto unpublished material

Bogarde wrote to each correspondent according to the nature of the friendship, but invariably he was frank, gossipy, funny and often malicious

The joy of writing, particularly as he grew older and chose to live in France, was never far away

The letters display the qualities familiar to those who knew the private Bogarde - acute observation, laser-like intelligence, impatience with the foolish, compassion for the needy, a relish for the witty metaphor, and a catastrophic disdain for correct spelling and punctuation

Above all, to read his letters is to hear him talk, and no conversation with Dirk Bogarde was dull